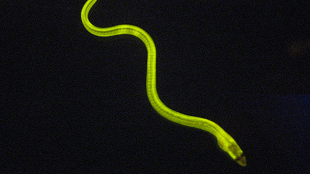 An unagi eel fluorescingIMAGE COURTESY OF RIKEN BRAIN SCIENCE INSTITUTEUnagi, the Japanese freshwater eel (Anguilla japonica), can be found on the menu of sushi bars around the world. A team of scientists studying the nutritional properties of this tasty sushi delicacy reported on Thursday (June 13) in Cell that they discovered a fluorescent protein produced by the eel’s muscle fibers. The researchers think the protein, which glows green when blue light is shone on it, may be involved in long distance swimming during its spawning migration from rivers to the sea. Dubbed UnaG, for unagi green protein, it is the first fluorescent protein found in a vertebrate species; most other known fluorescent proteins have come primarily from jellyfish, corals, and microbes.

“I don't think anyone would have thought that eels would have such a bright fluorescent protein,” Robert Campbell, a chemist at the University of Alberta...

One unique feature that distinguishes UnaG from other fluorescent proteins is that it does not produce light with a chromophore within its protein structure. Instead, UnaG fluoresces only when bound with a naturally occurring small molecule found in the eel’s muscles called bilirubin. In humans, bilirubin is produced by the breakdown of haemoglobin. Too much bilirubin in the blood can be toxic. Hospitals test for bilirubin’s levels in the blood to assess liver function and diagnose diseases such as jaundice and anemia. The researchers have used UnaG’s fluorescent properties to design a more sensitive, accurate, and speedier assay for bilirubin levels.

Another unique aspect of UnaG is its capacity to fluoresce in low-oxygen environments, meaning it could be used as a marker for anaerobic regions in cancerous tumors.

“Before the discovery of UnaG, I couldn’t imagine that basic science could have such a direct impact on human health,” Atsushi Miyawaki, a molecular biologist at the RIKEN Brain Science Institute in Japan and senior author on the paper, said in a statement. “From a simple eel, we found a new path to the clinic.”