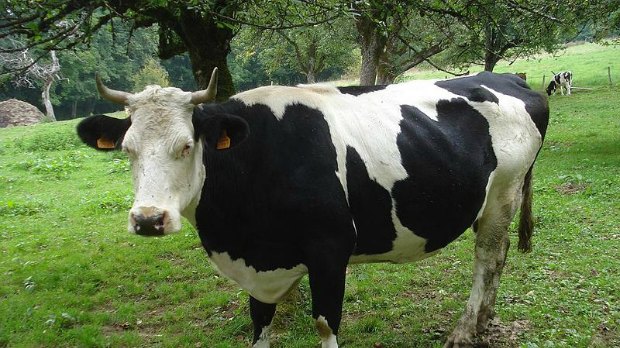 WIKIMEDIA, YORISSETwo fuzzy, black-and-white Holstein calves named Spotigy and Buri arrived on the campus of the University of California, Davis, as test subjects to breed dairy cows without horns. Biotech firm Recombinetics used a gene-editing technique to change the bulls’ gene for horn growth to a sequence resembling that of hornless beef cattle.

“The plan is to track the calves’ growth and development and see whether the two faithfully transmit the hornless trait to their offspring,” The Sacramento Bee reported this week (December 20).

The development of Spotigy and Buri represent progress in the field of genetically engineered livestock. So far, salmon is the only genetically modified animal approved for human consumption in the U.S. The fish grow nearly twice as fast, thanks to the introduction of a growth hormone.

Inhibiting horn growth in dairy cows would avoid them being subjected to dehorning, an expensive and painful process. Recombinetics...

Breeding Spotigy and Buri at UC Davis will determine whether their hornlessness will be passed on to their offspring. “The odds are 100 percent if Mendelian genetics holds true,” Alison Van Eenennaam, a geneticist at UC Davis’ College of Agriculture and Environmental Sciences, told The Sacremento Bee.