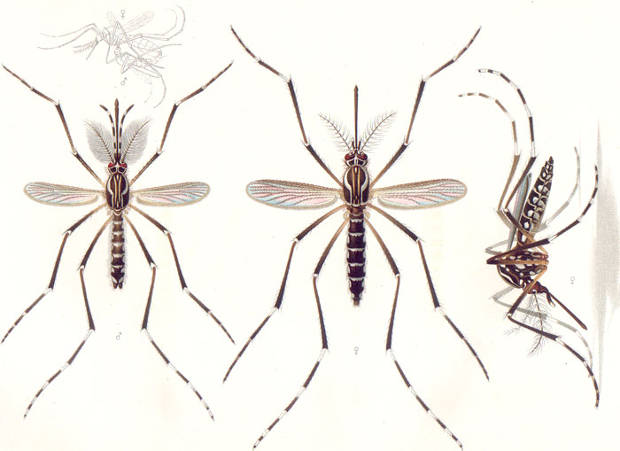 Illustration of Aedes aegypti (a male on the left, two females on right) by Emil August Goeldi, 1905WIKIMEDIAIn one year, the small town of Piracicaba, Brazil, halved its number of dengue cases by eliminating standing water. Neighborhoods that also released hordes of genetically modified (GM) male Aedes aegypti mosquitos, whose offspring die before they begin to bite, saw a 90 percent reduction in dengue cases. The data, released last week (July 14)by the UK firm Oxitec—which developed the GM mosquitoes—is the first field trial to demonstrate that the strategy reduces disease burden, as opposed to simply lowering mosquito numbers. Officials in Florida are considering a GM mosquito-based approach to get ahead of the impending Zika threat.

“It is very encouraging,” Philip McCall of the Liverpool School of Tropical Medicine in the U.K. told New Scientist. But the trial was small—only about 5,000 people live in Piracicaba—and it did...

Still, Brazil is set to start commercially licensing the GM mosquito control method, Oxitec chief executive Hadyn Parry told New Scientist, and the US Food and Drug Administration (FDA) is considering the technology’s approval stateside. If the FDA gives the green light, the Florida Keys will vote in November on use of the technology in the area, New Scientist reported.