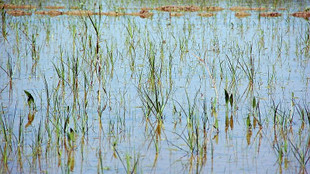 WIKIMEDIA, FRITZ GELLER-GRIMMGenetically modified rice could help protect children and the immuno-compromised from diarrheal disease, according to a study published last week (August 8) in The Journal of Clinical Investigation. More than 600,000 children die of rotavirus infections each year, and researchers say the rice could eventually supplement currently available vaccines and other treatments to reduce the rates of rotavirus-related death.

To produce their virus-fighting rice, the researchers inserted genes from llamas in order to get the plants to produce a key section of a rotavirus-targeting antibody, MucoRice-ARP1. This antibody fragment survives digestion, making oral administration possible.

The researchers tested the product in mice, giving them water mixed with rice powder before inoculating the animals with rotavirus. The mice that had received the genetically modified rice water had less diarrhea and a lower viral load than those not given the treatment.

There are already two vaccines available for...

But Mathuram Santosham, who studies rotaviruses at Johns Hopkins University, told SciDev.net that “substantially more research is needed to understand the potential impact of this intervention in humans.” She added that, “in the meantime, it is important to remember that we have highly effective tools, which are available now, including rotavirus vaccines, oral rehydration solution, and zinc supplementation.”