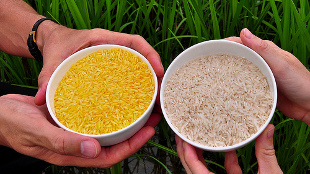 FLICKR, IRRI IMAGESOne year ago, the publication of a study on vitamin A uptake in Chinese children fed golden rice sparked a fierce controversy that resulted in several scientists and government officials affiliated with the study losing their jobs. This week (September 17), Tufts University released the findings from its investigation into the research and the actions of the lead investigator, the school’s own Guangwan Tang.

The scrutiny has centered on whether the 24 children who participated in the research and their families were given adequate explanation of the two-year study. Golden rice is a genetically modified variety that contains beta-carotene, designed to combat vitamin A deficiencies in developing countries. The study consent forms made no mention of genetic modification (GM), but instead referred to the golden rice as a “new rice”, likely because US federal guidelines require such forms be written in easy-to-understand language, and GM food remains—as...

Tufts concluded that “while the study data were validated and no health or safety concerns were identified, the research itself was found not to have been conducted in full compliance with IRB [institutional review board] policy or federal regulations.” The investigation also found that the dates on some consent forms may have been changed, while other forms may have been “inappropriately signed.” Some parents claimed they had not even been aware they were participating in a scientific study, thinking it was a school program.

Tang has been barred from conducting human-subject research for the next two years as a result of the findings, though according to ScienceInsider, the professor, 64, has decided to close her lab next year and retire.