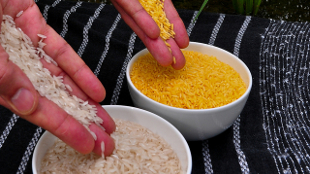 FLICKR, IRRIIn hopes of preventing the retraction of her 2012 paper in The American Journal of Clinical Nutrition, which led to much controversy regarding whether the researchers used proper consenting practices to enroll the 24 children participants of the study, nutrition scientist Guangwen Tang is suing the American Society for Nutrition (ASN) and her institution, Tufts University, ScienceInsider reported last week (July 17).

The study involved testing the effects of the genetically modified (GM) rice called golden rice that aim to fight vitamin A-deficiency in school-aged Chinese children; the researchers wanted to determine how efficiently β-carotene is converted into the essential vitamin. Soon, accusations flew that the group had not gone through the proper consenting processes. That December, the Chinese Centre for Disease Control (CDC) fired the three China-based authors and offered financial compensation to the parents of the study participants. Tang retired from Tufts University the...

Now, the ASN wants to withdraw the paper, but Tang argued in a Massachusetts court this month (July 9) that a retraction would amount to defamation, according to Courthouse News Service. In fact, despite the authors’ wishes the society did retract the paper on its own, but the study is officially back in the literature for at least 90 days while Tang’s lawsuit is pending, Adrian Dubock, executive secretary of the Golden Rice Humanitarian Board in Switzerland, which was not involved in the study, told ScienceInsider.

According to Dubock, a wealthy philanthropist has offered financial support for Tang’s legal action, which also includes a second lawsuit against the university. “My understanding is that this person is very troubled by socially important issues that affect the disadvantaged,” Dubock told ScienceInsider.