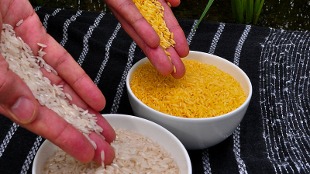 WIKIMEDIA, INTERNATIONAL RICE RESEARCH INSTITUTEA US-funded study in which Chinese schoolchildren were fed genetically modified (GM) rice sparked a firestorm of controversy in China after it was published this August. The study’s authors were accused of violating ethical guidelines by not properly informing the parents about the GM rice. Following an official investigation, the Chinese Centre for Disease Control (CDC) has now sacked the study’s three China-based authors and offered generous financial compensation to the parents of the children involved.

“This is an alarm bell for biotech scientists on the importance of strictly following ethical and other regulations on research," wrote Huang Jikun, director of the Chinese Academy of Sciences' Center for Chinese Agricultural Policy in Beijing, in an e-mail to ScienceInsider. But Adrian Dubock, a Switzerland-based manager for the Golden Rice Project, which promotes development of GM rice, said most of the charges are unfounded....

Funded by the US National Institutes of Diabetes and Digestive Diseases and the US Department of Agriculture, the study was designed to find out how efficiently β-carotene in GM Golden Rice is converted into Vitamin A, of which there is a worldwide deficiency. According the CDC in China, 25 children from a school in Hunan province were fed the rice in 2008, while 55 others were fed spinach or capsules containing β-carotene in oil, as controls.

The CDC said that the informed consent forms signed the parents of the children did not mention the GM rice. A statement from the CDC said that the researchers “had meticulously concealed their reality,” according to ScienceInsider. But an English version of the consent form obtained by ScienceInsider does call it Golden Rice, and Dubock said that they likely avoided the term GM to comply with US government guidelines to explain studies in understandable language, and because the term is so loaded that people might equate it with danger.

The corresponding author of the study, Tang Guangwen of Tufts University in Boston, was also accused of violating Chinese regulations and importing the rice into China without permission. Tufts is conducting its own review.