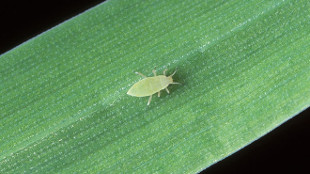 In an effort to cut back on the need for pesticides, many research groups have developed genetically modified (GM) wheat that can fight pathogens and resist pests. Besides incidental appearances of Monsanto’s Round-up Ready wheat, just one variety of GM wheat has made it out of the lab and into the field for testing. But according to a study published in Scientific Reports yesterday (June 25), those field trials have failed.

Researchers at Rothamsted Research in Harpenden, U.K., designed the study, which took place over the course of several months in 2012 and 2013, to test the resistance of wheat programmed to make a pheromone that repels aphids, insects that feed on and transmit viruses to plants. The pheromone, called (E)-β-farnesene (Eβf) also attracts some aphid predators. Despite its ability to deter aphids in lab tests, the Eβf-producing wheat harbored similar numbers of aphids...

“We had hoped that this technique would offer a way to reduce the use of insecticides in pest control in arable farming,” study coauthor Huw Jones, a molecular biologist at Rothamsted said in a statement. “As so often happens, this experiment shows that the real world environment is much more complicated than the laboratory.”

Jonathan Gershenzon, who studies plant chemistry at the Max Planck Institute for Chemical Ecology in Jena, Germany and was not involved in the study, told The Guardian that the pheromone-releasing strategy likely “doesn’t work in nature because the aphids get used to the continuous release of their alarm pheromone and thus learn to ignore it.”

According to Nature News, the Rothamsted team plans to address this issue by programming their wheat to release Eβf in bursts rather than continuously.

“I give them lots of points for trying and even more points for being willing to publish negative data,” Gershenzon told Nature News. “It shows how science can work.”