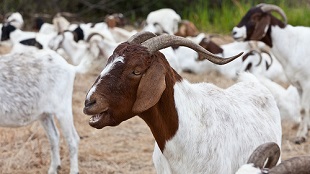 FLICKR, MIKE BAIRDMale goats exude a compound, 4-ethyloctanal, that can prompt female goats’ brains to release chemicals to stimulate their reproductive systems, according to a study published last week (February 27) in Current Biology. When the compound is exposed to air, it oxidizes to 4-ethyloctanoic acid, which is long known to be partially responsible for the familiar “goaty smell” and to attract females.

“We are tempted to speculate that this is a clever reproductive strategy of the male goat to alter behavior and activity of the reproduction center in the female for mating by a single molecule,” coauthor Yukari Takeuchi of University of Tokyo said in a statement.

Takeuchi and his colleagues had previously found that the “male effect” was caused by the skin on goats’ heads, so they fitted male goats with a specially designed cap to capture compounds released by normal as well as castrated male...

“There are relatively few instances in mammals where an individual compound has been positively identified as having a pheromonal effect,” the University of Bristol’s Peter Brennan, who was not involved in the research, told National Geographic’s Not Exactly Rocket Science. “There are fewer still in non-rodent species that have commercial importance.”

They authors suggest the finding may have implications for other livestock, and perhaps even humans, because the reproductive center of the brain is similar across most mammals.