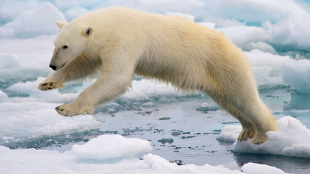 WIKIMEDIA, ARTURO DE FRIAS MARQUESTo keep ahead of melting ice, polar bears have begun migrating to the Canadian Archipelago, researchers reiterated in a PLOS ONE study published this week (January 6). An international team analyzed genetic material from nearly 2,800 polar bears, finding four broad groupings of animals from different geographic locations around the Arctic. Using these samples, collected from the 1980s to 2008, scientists were able to trace the polar bears’ gene flow—the geographic movement of genetic markers across several generations.

The DNA told a striking tale: in the last one to three generations, polar bears from the Southern Canada and Eastern Polar Basin (northern Russia and Scandinavia) have moved toward the icier Canadian Archipelago. “The polar bear’s recent directional gene flow northward is something new,” study coauthor Elizabeth Peacock of the US Geological Survey said in a statement.  “In our analyses that focused on more historic...

The genetic analysis provided a broader picture of polar bear movement than previously available via satellite collar studies, which can only track female polar bears because male bears’ necks are wider than their heads. The authors expressed hope that their new data will inform both conservation efforts and future genetic studies as polar bears adapt to a warming environment. “Given that Arctic habitats are changing rapidly, our analyses provide evidence of potential future diversity for polar bears,” Peacock and her colleagues wrote in their paper.