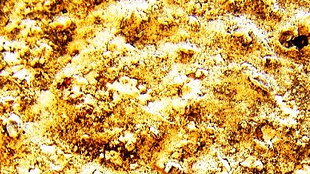 Flickr, Smitha MurthyIn the town of Chesterfield, Missouri, just outside of St. Louis, $700,000 worth of gold dust has gone missing from a drug discovery lab. After a routine inventory at a Pfizer medical research lab, which investigates biologics and other novel drugs, failed to locate the gold, the local police launched an investigation to determine whether or not it has been stolen.

“We’re not even sure if they just didn’t account for it and it was used naturally, or if it was stolen or misplaced,” Chesterfield Police Captain Steven Lewis told the St. Louis Post-Dispatch.

Experts estimate that the missing gold could weigh between 30 and 70 pounds, depending on purity. Though Pfizer declined to comment on how it uses the gold, such particles can be used in drug delivery and nanotechnology applications.

“We are taking this matter very seriously and working closely with local law enforcement...

Local gold dealers say it is unlikely that the gold dust will easily be sold, as jewelers tend to only buy from known dealers, and usually in very small quantities, Mike Matula, general manager of Missouri Gold Buyers in St. Louis, told the Dispatch. “If someone showed up with a bucket full of this stuff, no one would buy it over the counter, not from our store at least,” he said. “I imagine it would be pretty difficult to show up with 50 pounds of it without being noticed.”

(Hat tip to the Associated Press)