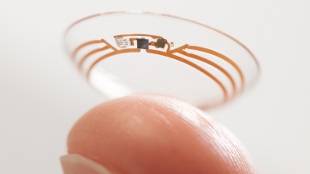 GOOGLEInternet giant Google and pharmaceutical company Novartis are joining forces to develop a high-tech contact lens that will be able to monitor blood sugar levels in people with diabetes, Novartis announced in a statement released Tuesday (July 15).

Google announced the creation of a prototype of the smart lens in January. “We’re now testing a smart contact lens that’s built to measure glucose levels in tears using a tiny wireless chip and miniaturized glucose sensor that are embedded between two layers of soft contact lens material,” the company said in a January 16 post on its official blog. “We’re testing prototypes that can generate a reading once per second.”

Six months later, Alcon, Novartis’s eye care unit, has licensed the technology from GoogleX, the research division within the Internet company that tackles global technological problems, with the goal of pushing the smart lens onto the market. “We are looking...

Blood glucose concentrations could be sent from tiny sensors via a super thin radio antenna in the contact lenses to a doctor’s or a wearer’s computer or smart phone to alert them to dangerously rising or falling levels.

“If it is accurate and affordable, it could be an absolute game-changer,” dietician and diabetes expert Jill Weisenberger told the Los Angeles Times. More than 29 million Americans have diabetes, according to the American Diabetes Association.

Jimenez declined to tell The New York Times the financial terms of the deal, nor did he give an estimate for what the lenses might cost.