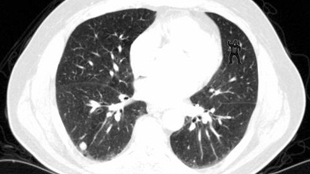 A majority of trained radiologists did not spot the gorilla in the upper right hand part of this CT image of a pair of lungs as they scanned for nodules.

Anyone who’s taken an introductory psychology course in the last 20 years likely remembers the “invisible gorilla” video. The video shows a group of kids engaged in a ball-passing game while, mostly unnoticed, a man in a gorilla suit scurries through the scene. The video is a striking example of a phenomenon called inattentional blindness, whereby observers may miss unexpected, but salient, events while engaged in other tasks. Researchers at Brigham and Women’s Hospital (BWH) in Boston examined whether inattentional blindness also affects expert observers. Their findings, published Wednesday (July 17) in Psychological Science, show that 83 percent of radiologists did not spot an image of a gorilla inserted into the...

“When engaged in a demanding task, attention can act like a set of blinders, making it possible for stimuli to pass, undetected, right in front of our eyes,” study lead Trafton Drew, a vision scientist at BWH, said in a statement. “We found that even experts are vulnerable to this phenomenon.”

The researchers asked 24 radiologists to examine five CT scans of lungs for nodules. An image of a dancing gorilla, 48 times larger than the average nodule the radiologists were charged with spotting, was inserted into the upper right hand corner of the final scan. Eye tracking during the experiment indicated that the majority of the radiologists who did not report seeing the gorilla looked directly at it.

“The radiologists missed the gorillas not because they could not see them, but because the way their brains had framed what they were doing. They were looking for cancer nodules, not gorillas,” Jeremy Wolfe, a psychologist and director of the Visual Attention Laboratory at BWH, said in the statement. “This study helps illustrate that what we become focused on becomes the center of our world, and it shapes what we can and cannot see.”