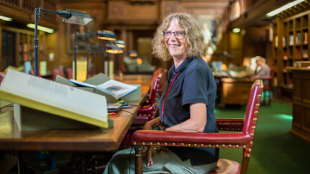 The MacArthur Foundation this week (September 17) announced its 2014 Fellows—a group of 21 innovators who will receive unrestricted $625,000 “genius” grants to pursue their passions over the next five years. Among the recipients are poets, lawyers, mathematicians, and computer scientists. Three of the winners conduct research with applications to human health, while another aims to understand the origins of science itself.

MacArthur Fellow Tami Bond, an environmental engineer at the University of Illinois, tracks emissions of black carbon—the main component of soot that results...

University of Pennsylvania bioengineer Danielle Bassett trained as a physicist, but always wanted to study the brain. She now takes advantage of her background to map changes in the brain’s networks as people learn. In reaction to receiving the award, Bassett said in a video, “I think it will give me some quiet time . . . to sit down and be really creative, and think about what I could do that I don’t have to prove will work at the beginning.”

Pamela Long, an independent historian based in Washington, DC, examines the processes that have shaped society’s approach to science, engineering, and intellectual property. Her current work focuses on public works projects in 16th-century Rome. “You have this communication between practitioners and learned people and I argue that that’s important for the development of the new sciences,” Long told Scientific American in a September 17 podcast. “People call it the scientific revolution.”