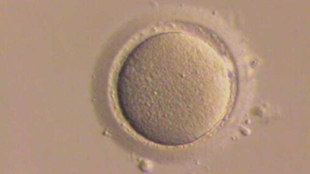 Human oocyteWIKIMEDIA, EKEMIt has long been believed that cells with diameters much bigger than 10 microns—the typical size of most eukaryotic cells—are rare because it is difficult for larger cells to acquire nutrients or expel waste. The oocytes of most animals are much bigger, and they likewise have larger nuclei, which often contain high concentrations of the protein actin. Cell biologists Marina Feric and Clifford Brangwynne of Princeton University in New Jersey have shown that cells are likely small because of gravitational forces and that the extra actin in oocyte nuclei stabilizes the responses of larger cells to gravity. Their work, published in the October issue of Nature Cell Biology, was surprising because cell biologists “really have never, in my experience, worried about gravity—or thought about it,” Brangwynne told The Atlantic.

Brangwynne and Feric injected tiny plastic beads into the germinal vesicles—nuclei—of 1 millimeter oocytes from African clawed frogs (Xenopus laevis). Beads of different radii moved differently within the nuclei—larger particles got stuck more often than smaller ones—which suggested that they were traveling through a network of actin. When the researchers treated the eggs with drugs that disrupt actin or injected them with a factor that decreased actin concentration in the nuclei, plastic beads of all sizes moved similarly. When they disrupted actin and injected metallic beads, these beads and endogenous organelles eventually settled to the bottom of the nucleus. Brangwynne and Feric applied forces to the germinal vesicles and showed that actin polymerized in response. “Gravity becomes really important at a smaller scale than you might have guessed,” Brangwynne said in a press release.

The paper illustrates a previously unknown function for actin in the nucleus, molecular biologist Dyche Mullins of the University of California, San Francisco, School of Medicine, said in the press release. “The results suggest a large cell becomes fragile and needs a scaffold inside to support and separate the large number of particles it contains.”