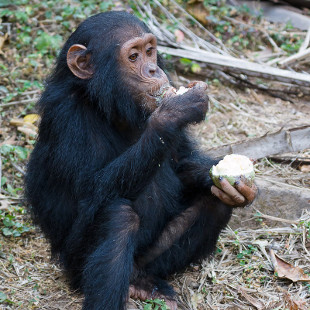 WIKIMEDIA COMMONS, IKIWANERCompared with those of humans, the gut microbiomes of chimpanzees, bonobos, and gorillas are remarkably similar—owing in part to shared ancestral microbial diversity. Since diverging from Pan, “humanity has experienced a depletion of the gut flora,” a team led by investigators at the University of Texas in Austin reported in PNAS this week (November 3). Biologist Howard Ochman and his colleagues characterized the microbiomes of African apes, finding that chimpanzees, bonobos, and gorillas harbor more diverse species of bacteria than humans. “Compositional change in the microbiome was slow and clock-like during African ape diversification, but human microbiomes have deviated from the ancestral state at an accelerated rate,” they wrote in the paper.

This loss of microbiome diversity had a lot to do with the human preference for animal-based diets, according to the team. But exactly how dietary and other factors may have altered the human gut has yet to be determined.

“Whether this change of the [microbiome] was one of the key drivers of human evolution and the development of human specific features remains to be shown,” Bosch told New Scientist.