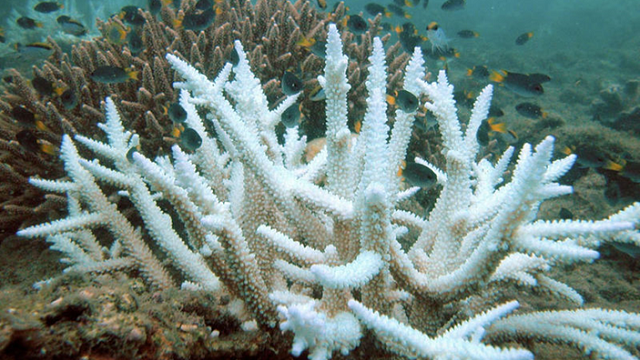 WIKIMEDIA, ACROPORAAustralia’s Great Barrier Reef experienced large die-offs, only to recover hundreds or thousands of years later, five times in the last 30,000 years, according to a study published today (May 28) in Nature Geoscience.

Researchers found that although the reef has shown greater-than-expected resilience to major environmental shifts such as rising sea levels and temperature changes, it is particularly sensitive to poor water quality and higher volumes of sediment.

Study coauthor Jody Webster of the University of Sydney says in a statement that the reef’s sensitivity to sediment is “of concern given current land-use practices.”

To peer into the reef’s past, researchers drilled rock cores and used underwater sonar to reconstruct the previous locations of the Great Barrier Reef. The team found that the reef has moved around over the last 30,000 years in response to changing sea levels, at a pace of up to 1.5...

However, on several occasions the reef apparently did not respond fast enough to environmental change. Researchers identified five “death events” in which large portions of the coral died off altogether. The most recent, which occurred around 10,000 years ago, was associated with a decline in water quality and increase in sediment.

Tom Bridge, a research fellow at the ARC Centre of Excellence for Coral Reef Studies who was not involved in the work, tells The Sydney Morning Herald that the findings are a reminder of the changing nature of the Great Barrier Reef. “We think of something like the reef as being big, that it’s always been there, and always will be there,” he says. The new research shows “it is a really dynamic system, but also the magnitude of how rapidly it can change.”

The authors emphasize in their paper that the findings do not suggest that the reef will be able to resist today’s rapid environmental change, writing, “Given the current rate of [sea-surface temperature] increase (0.7 °C per 100 years), sharp declines in coral coverage, and the potential for year-on-year mass coral bleaching, our new findings provide little evidence for resilience of the [Great Barrier Reef] over the next few decades.”