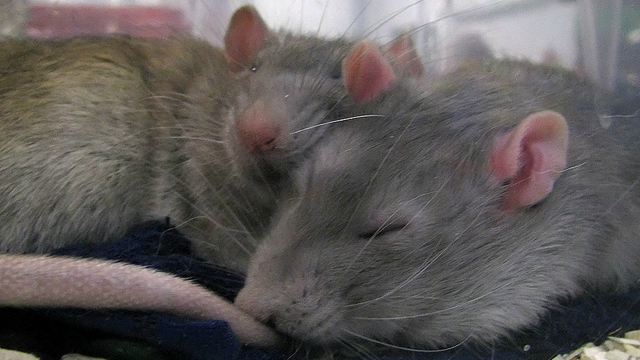 FLICKR; TOMI TAPIO KBrain-derived neurotrophic factor (BDNF), a protein linked in previous research to long-term memory and to multiple brain-related diseases in humans, helps rats regulate when and for how long they slip into rapid eye-movement (REM) sleep, a new study finds. The work, by Jennifer Garner, Subimal Datta, and colleagues at the University of Tennessee, appears in a poster presented at the annual Society for Neuroscience meeting this weekend.

The researchers genetically altered rats to produce 50 percent of the normal amount of BDNF, and using electrodes implanted in the animals’ brains, compared their sleep patterns to that of normal rats used as controls. They found that the rats with lower levels of BDNF had fewer and shorter bouts of REM sleep than the normal rats, Garner said at a poster presentation on November 11.

Next, the team deprived all of the rats of just REM sleep for...

The study shows that BDNF plays a role in regulating REM sleep, Garner says—a finding that meshes with earlier research. The protein’s levels have previously been shown to increase following exercise in rats and humans, for example, and exercise, in turn, has been linked to better sleep. Conversely, low levels of BDNF have been linked to depression, which is often associated with sleep disruptions.