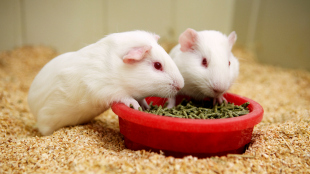 FLICKR, NOVARTIS AGTo understand how the Ebola virus spreads among people and animals, scientists have looked to guinea pigs to serve as an experimental model. In this month’s issue of the Journal of Virology, a team led by investigators at the Public Health Agency of Canada reported that guinea pigs did not need to contact infected animals directly to contract Ebola: shared bedding and adjacent cages were sufficient to spread the virus.

“[T]he experimental results do not support airborne spread of [Ebola virus] but demonstrate instead that virus transmission can occur through direct contact with infected materials traveling over short distances,” Public Health Agency of Canada’s Gary Kobinger and his colleagues wrote in their study.

Of course, direct contact with infected animals was the most effective means of spreading the virus. Up to five out of six guinea pigs died within two weeks of exposure to infected cagemates....

Such a tool has been lacking for Ebola researchers. “[E]fforts to study mechanisms underlying host-to-host spread have been hampered by the lack of cost-effective animal models,” the journal’s editors wrote in an accompanying commentary.