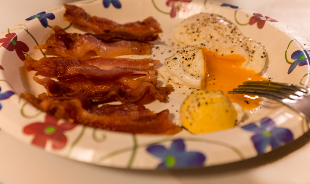 FLICKR, RPAVICHTen volunteers who agreed to eat a diet entirely provided by microbiologist Harvard Peter Turnbaugh and his colleagues are living proof of the gut microbiome’s lability. After five days, those that ate only animal products had a similar suite of bacteria in their guts, which varied dramatically from the microbiome of those feasting on a high-fiber, plant-only diet. Specifically, while the types of bacteria present remained largely unchanged, the abundances of different types responded to the dietary restrictions, according to a study published this week (December 11) in Nature.

“It’s a landmark study,” Rob Knight, a microbial ecologist at the University of Colorado, Boulder, who was not involved with the work, told ScienceNOW. “It changes our view of how rapidly the microbiome can change.”

In 2009, Turnbaugh’s team had shown a similar effect in mice: a change in diet could affect the murine gut microbiome...

Before the week was up, the researchers found noticeable differences in the gut bacteria of the two treatment groups. The meat-eaters harbored more bacteria that are able to tolerate high levels of bile acids, which are secreted by the body to help digest meat. The bacteria isolated from this group also appeared to increase expression of genes involved in breaking down proteins. Plant-eaters, on the other hand, had fewer bile-resisting bacteria and higher expression levels of gene associated with carbohydrate digestion.

“There are interesting evolutionary implications to such a rapid response,” David told National Geographic’s Not Exactly Rocket Science. “The ability for the gut microbiome to quickly react to changes in diet may have conferred an extra layer of nutritional buffering, and provided ancient humans with increased dietary flexibility.”

“The paper has made the next leap in the field,” Mayo Clinic gastroenterologist Purna Kashyap told NPR. Of course, he added, the results will need to be well verified and elaborated upon before any sort of health-care recommendation can be made. “With discovery comes responsibility. Once you make this big finding, it needs to be tested appropriately.”