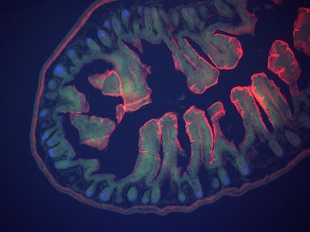 A fluoresence image of a mouse intestineWIKIMEDIA, KELVINH88Mice exhibiting autism-like behaviors enjoyed a reduction in their symptoms when treated with a human gut microbe, according to a study published recently (December 5) in Cell. The microbe also eased the mice’s gastrointestinal problems, which had previously linked to autism in humans.

The link between GI problems and autism had previously hinted at a role of the gut in the behavioral disorder. And in 2013, Caltech neurobiologist Paul Patterson and colleagues devised an autism mouse model in which intestinal walls break down allowing substances to leak out of the gut. Teaming up with Caltech colleagues Sarkis Mazmanian and Elaine Hsiao, Patterson found that the “autistic” mice harbored lower levels of Bacteroides fragilis in their guts. And when B. fragilis was added to the animals’ diets, they seemed to get better—both in terms of their behavior and their gastrointestinal health....

“It’s incredible that putting this one bacteria back can reverse all these widespread changes,” John Cryan, a pharmacologist at University College Cork in Ireland, told Nature. McMaster University’s Stephen Collins added, “I think there is now sufficient proof of concept where people can start to look at probiotic bacteria to improve brain function in humans.”

The researchers further dissected what was going on by screening for chemicals in the blood that differed between autistic and wild-type mice. One compound, 4-ethylphenylsulphate (4EPS), stood out: it was found at levels 46 times higher in autistic mice. Injecting 4EPS into wild-type mice resulted in autism-like behaviors. It’s still unclear if B. fragilis is producing 4EPS, however.