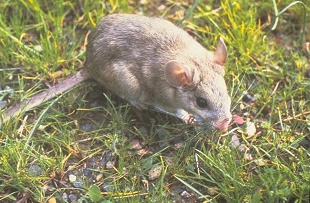 Neotoma sp.WIKIMEDIA, USGS, KEN COLERats in the Mojave Desert chow down on the toxin-laced leaves of creosote bushes but suffer no ill effects. An analysis of the rodents’ gut microbes now shows that microbial genes help them digest the toxins, according to a study published this week (July 20) in Ecology Letters.

Creosote resin, which coats the surfaces of leaves, is mainly comprised of nordihydroguaiaretic acid, an aromatic compound that can cause liver damage and kidney cysts in lab animals. However, Mojave woodrats consume the resin daily, in amounts that would be lethal to other animals.

The desert rodents only began to consume creosote approximately 17,000 years ago, when climatic changes helped the plant take root in the region. However, creosote did not spread into the adjacent Great Basin desert, where the same species of rats continue to rely on an ancestral diet of juniper. Previous studies...

Kevin Kohl of the University of Utah and his colleagues sequenced the gut microbes of creosote-consuming woodrats, and found a higher proportion of bacterial genes that help metabolize aromatic compounds in those animals, compared with their non-creosote-eating counterparts. The creosote-eating animals also had a significantly higher abundance of one gene, aryl-alcohol dehydrogenase, compared to rats that ate normal laboratory food.

Treating creosote-digesters with antibiotics reduced the microbial diversity in their foreguts by half. While the animals were able to eat nontoxic foods and maintain their body weight, they lost their ability to digest creosote. When the researchers transplanted gut microbes from creosote-eating rats to those that could not digest the toxins, the latter group gained the ability to metabolize creosote. The results demonstrate that the microbes can enhance their rodent hosts’ ability to digest the phenolic creosote toxins, and thus “expand the dietary niche breadth of mammalian herbivores,” according to the authors.

“Our results hold promise for other experimental designs to conduct microbial transplants in non-model systems,” the authors wrote in their study. “Detoxifying microbes might provide a means to engineer livestock that can be reared in an environment containing toxic plants.”