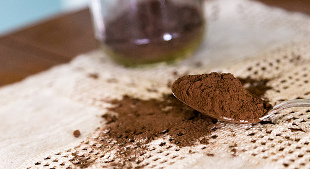 FLICKR, CART-WHEELSMicrobes like Bifidobacterium and lactic acid bacteria that reside in the human gut “feast on chocolate,” said Louisiana State University’s Maria Moore, an undergraduate student who assisted on a research that examined the effects of dark chocolate on gut bacteria, in a statement released at the American Chemical Society’s annual meeting being held in Dallas, Texas, this week. “When you eat dark chocolate, [these bacteria] grow and ferment it, producing compounds that are anti-inflammatory,” Moore added.

In in vitro experiments meant to model the human digestive tract, LSU food scientist John Finley’s team tested three cocoa powders, subjecting the substances to anaerobic fermentation using human fecal bacteria. The researchers found that, within the mock gut, the cocoa’s fiber content “is fermented and the large polyphenolic polymers are metabolized to smaller molecules, which are more easily absorbed,” Finley said in the statement. They also found that the smaller molecules...

The researchers have yet to confirm their results in vivo and cautioned that the apparent benefits of consuming cocoa powder don’t extend to gobbling dark chocolate bars from the corner store. “Our results don’t translate to a Hershey bar,” Finley told NPR. The British Heart Foundation’s Christopher Allen told BBC News that even though heart-healthy compounds like flavanols are found in dark chocolate, these molecules “are often destroyed by processing, and by the time a chocolate bar lands on the supermarket shelf it will also contain added extras such as sugar and fat.”