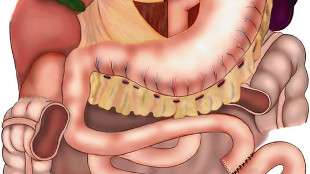 Researchers have found evidence linking bariatric surgery to long-term changes among the microbial populations of the GI tract, according to a small study published in Cell Metabolism this week (August 4). The results are based on a nine-year follow-up study of seven women who opted for a gastric bypass and seven other women who had the size of their stomachs reduced via vertical band gastroplasty.

The gut microbiomes of the bypass patients displayed significant compositional differences compared to those of seven obese women who did not undergo surgery.  Specifically, Live Science reported, Escherichia, Klebsiella, and Pseudomonas were more commonly found in the intestines of patients who had the bariatric surgery. Otherwise, there were no statistically significant differences among the three groups. These changes were not dependent on body-mass index or the amount of fat lost after surgery.

When the researchers—led by Fredrik Bäckhed of the University...

“Our findings are important in light of the growing epidemic of obesity and associated diseases,” Bäckhed said in a statement. “Since surgery always confers a risk, it is critical to identify non-surgical strategies. One potential strategy would be to devise novel probiotics based on our findings that can be supplied to obese individuals.”