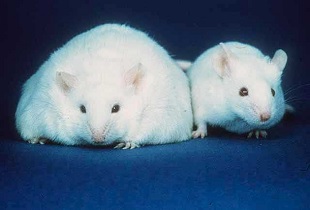 WIKIMEDIA, ORNLSeveral studies have linked changes in the gut microbiome to obesity, insulin resistance, and metabolic syndrome, but the details of the link have been unclear. Now, a team led by researchers at Yale University has uncovered one pathway leading from gut microbes to increased food intake and insulin secretion in rodents, pointing to potential therapeutic targets for obesity in humans. The findings were published earlier this week (June 8) in Nature.

“Alterations in the gut microbiota are associated with obesity and the metabolic syndrome in both humans and rodents,” study coauthor Gerald Shulman of Yale said in a statement. “In this study we provide a novel mechanism to explain this biological phenomenon in rodents, and we are now examining whether this mechanism translates to humans.”

The researchers had previously noticed that high-fat diets stimulated increased levels of acetate in rodents’ blood streams, and that this increase...

Antibiotic-treated rats and germ-free mice produced relatively low levels of acetate, the team showed, but restoring the animals’ normal gut microbiota led to increased acetate production; feeding the rodents a high-fat diet raised acetate levels even further. “Taken together, these experiments demonstrate a causal link between alterations in the gut microbiota in response to changes in the diet and increased acetate production,” Shulman said in the statement.

The team also showed that rather than directly stimulating pancreatic cells to secrete insulin, acetate triggers a signal from the brain to the pancreas via the vagus nerve—part of the parasympathetic nervous system—providing a potential target for therapy. “Acetate stimulates beta cells to secrete more insulin in response to glucose through a centrally mediated mechanism,” Shulman added. “It also stimulates secretion of the hormones gastrin and ghrelin, which lead to increased food intake.”

Speaking with Science News, Jonathan Schertzer of McMaster University in Canada who was not involved in the research called the paper a “tour-de-force,” noting that it builds upon other studies on the microbiota-obesity link. “When you find a factor that actually influences metabolism, that’s important,” he said.