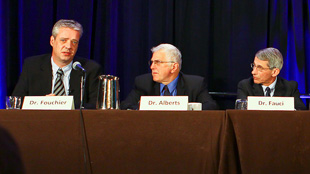 Ron Fouchier, who leads one of the controversial H5N1 research projects (far left) with Bruce Alberts, Editor-in-Chief of Science and Anthony Fauci, director of the National Institute of Allergy and Infectious Diseases (NIAID) at the American Society of Microbiologists biodefense meeting held on February 29. FLICKR, MICROBE WORLD

Since the US government asked the National Science Advisory Board for Biosecurity (NSABB) last week to reconsider revised manuscripts of controversial H5N1 research, which contain “new” and "clarified older data" not evaluated previously by the NSABB, several members of the security board, as well as a senior US congressman, have spoken out about the unfolding events.

Lynn Enquist, molecular biologist at Princeton University and one of the 23 voting members of the NSABB panel told ScienceInsider that the H5N1 experiments carried out independently by research teams at Erasmus Medical Center in Rotterdam, the Netherlands, and the University of Wisconsin, Madison, clearly...

“They not only changed the host range of a dangerous pathogen, they also changed its mode of transmission," she said. “All the other differences in methods, or new or clarified work on virulence in ferrets, does nothing to change those facts.”

Arturo Casadevall, chair of the Division of Infectious Diseases at Albert Einstein College of Medicine told ScienceInsider that while he will go the next NSABB meeting, which is currently scheduled for the end of March, "with an open mind,” he urges caution. “We're dealing with an organism that we know can cause pandemics and can kill a lot of people.”

Meanwhile, the day after NSABB’s reconsideration of the publication of the H5N1 research, Republican Congressman Jim Sensenbrenner, who is currently vice chair of the House Committee on Science, Space, and Technology, sent a letter to White House science adviser John Holdren saying the Administration’s response to the controversy appears “ad hoc, delayed, and inadequate.”

“The outstanding question is less about why the NSABB is recommending against publication than it is about why this research was performed at all,” he wrote.

The letter also includes a list of questions to Holdren about the mechanisms currently in place to identify, evaluate, and disseminate so-called “dual use research.”