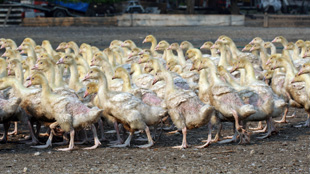 In light of the call to halt all research on H5N1 transmissibility and virulence for 60 days issued by 39 influenza researchers around the world last week, one of the scientists involved in the controversial research spoke out about the decision to limit or keep his work under wraps.

“As the risks of such research and its publication are debated by the community, I argue that we should pursue transmission studies of highly pathogenic avian influenza viruses with urgency,” Yoshihiro Kawaoka, a virologist at the University of Tokyo and the University of Wisconsin, Madison, wrote in a Nature commentary yesterday (January 25).

Kawaoka led the team of researchers who combined the H5 haemagglutinin (H5 HA) gene from the avian flu virus with the genes from the H1N1 influenza virus that caused a pandemic in 2009. Like the strain concocted by the research team led by Ron Fouchier at...

Although there is a potential risk that such research could be used for bioterrorism, Kawaoka argues that there’s an even more prevalent risk that naturally existing strains may acquire mutations that can ultimately result in devastating human pandemics. “I believe that it would be irresponsible not to study the underlying mechanisms,” he wrote.

Moreover, he disagrees with the US National Science Advisory Board for Biosecurity’s recommendation to refrain from publishing all the details in the study to deter bioterrorists from engineering lethal strains. “Redacting our papers will not eliminate that possibility,” he wrote. “There is already enough information publicly available to allow someone to make a transmissible H5 HA-possessing virus.”

“The redaction of our manuscript, intended to contain risk, will make it harder for legitimate scientists to get this information while failing to provide a barrier to those who would do harm,” he added.