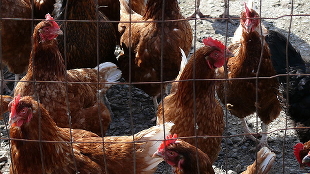 WIKIMEDIA, GAVIN SCHAEFERA 20-year-old Taiwanese woman is the first person confirmed to have been infected by the H6N1 avian flu virus, which has been circulating in poultry on the island.  Scientists had believed that the strain would not impact humans. A team led by investigators at the Centres for Disease Control in Taipei reported on this first human case of H6N1 infection in The Lancet Respiratory Medicine (November 13).

According to the Associated Press, the patient presented at the hospital, where she was treated for a lung infection with Tamiflu and antibiotics before being released. One of her throat swabs was sent to the Taiwanese public health agency, where researchers made the strain identification.

“H6N1 is a low pathogenic virus commonly found in wild and domestic birds across many continents. Our findings suggest that a unique group of H6N1 viruses with the human adaption marker G228S have become...

Imperial College London’s Wendy Barclay, a virologist who was not involved in the work, told Reuters that the H6N1 discovery “again underscores that there are so many viruses out there, and we just don't really know which pose the greatest threats to us.” This first reported infection appears to be an isolated case, Barclay noted, adding that “it is possible that in these days of increased vigilance we are picking up the occasional zoonosis that we previously missed.”

The study’s authors suggest that their discovery “highlights the continuous need for preparedness for a pandemic of unpredictable and complex avian influenza.”