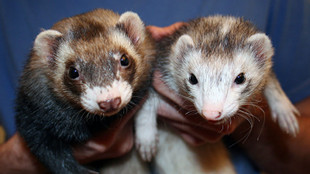 WIKIMEDIA, GUY HAIMOVITCHThe avian virus H7N9 is transmissible between ferrets, a common animal model for studying how flu might behave in humans, according to a paper published yesterday (May 24) in Science. Nevertheless, there have so far been no clear cases of human-to-human transmission since March, when the infection was first found in humans. But the new findings have scientists worried that the virus, which has killed 36 people in China, could become contagious between humans.

“On a scale from 1 to 10—from an avian virus with no potential to infect humans to a fully human-adapted strain—we don’t know exactly where this H7N9 is,” Richard Webby, a coauthor of the paper along with researchers in China and Canada and a virologist at St. Jude Children’s Research Hospital in Memphis, told NPR. “But I think we can safely say from these data that it might be closer to...

Researchers inoculated four pigs and six ferrets with live virus, and all of them became infected, according to Nature. The pigs didn’t appear to be able to pass the virus on to healthy pigs or healthy ferrets, but when the researchers placed an infected ferret in a cage with healthy ferrets, all the healthy ferrets fell ill. The team also placed sick ferrets in cages 10 centimeters away from three uninfected ferrets. One was unaffected, a second was infected, and the third developed antibodies to H7N9, indicating exposure to the virus and suggesting it could transmit through the air.

There have been no new cases of H7N9 since May 7, however, and Webby told NPR that he feared complacency. “We really need to get on top of this virus and get it out of animal populations,” Webby said. “Otherwise it’s just not going to go away.”