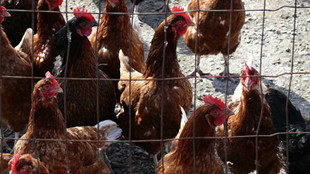 The novel H7N9 virus that has been infecting people in China since February likely got its genes from at least four different bird viruses, according to a paper published yesterday (May 1) in The Lancet. Chinese researchers determined the virus’s history by looking at sequences of four different viral isolates from infected patients.

The virus was first identified a little over a month ago and has infected 126 people and killed 24, according to the World Health Organization’s latest numbers. It has been found in chickens, ducks, and captive-bred pigeons at live animal markets, where it is suspected to have infected many of its victims.

The numbered Hs and the Ns in flu viruses’ names come from two proteins: hemagglutinin (HA) and neuraminidase (NA). The HA protein helps the virus latch on to host cells, while the NA protein is necessary for the virus to...

The Chinese scientists attempted to match the sequences the viruses’ components to previously sequenced flu virus strains from animals. The H7 component of the virus likely came from avian flu in a ducks and matches most closely to ducks in the Zhejiang Province, they concluded. The closest matches for N9 were the NA proteins of avian viruses from wild ducks sampled in 2011 in South Korea. These animals are known to migrate regularly between China and Korea.

The scientists say that the wild birds carrying H7 and N9 viruses likely passed them to domesticated poultry, where they recombined into the H7N9 virus that is infecting people today.

The internal genes of the virus appeared to come from two different H9N2 viruses from chickens in China. Hinting at an earlier recombination event, the polymerase genes of the virus, which help it replicate, appear to be related to virus from a wild migratory bird called a brambling.

“[L]ow pathogenicity in avian hosts probably allowed the virus to spread silently in domestic and wild birds,” Belgian virologists Marc Van Ranst and Philippe Lemey woret in a commentary accompanying the Lancet article.  “Containing this hidden epidemic might prove very challenging in view of the magnitude of the domestic and wild bird populations in China.”