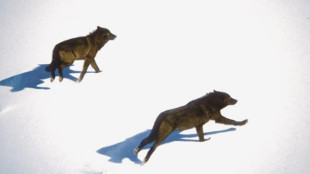 Wolves in Alberta run across a frozen lake away from an approaching helicopter. FUNCTIONAL ECOLOGY, PAUL PAQUET

Wolves are often viewed as enemies of humans, as they compete for prized prey species and sometimes kill valuable livestock. In Northern Canada, where wolves are hunted as part of government control programs, this culling has consequences for the animals’ hormone levels, according to a study published last week (November 12) in Functional Ecology. High levels of stress hormones and altered levels of reproductive hormones may reflect disruptions in the wolves’ social structure and could affect their vulnerability to disease.

Scientists from the Universities of Calgary and Victoria in Canada collected hair from wolves killed by hunters over a period of 13 years. Because steroid hormones are incorporated into growing hair from the follicles, levels of cortisol, progesterone, and testosterone measured in hair reflect long-term hormone levels in the animals.

“Although the long-term effects of chronically elevated stress and reproductive hormones are unknown, there are potential implications for wildlife health, welfare, long-term survival, and behavior,” the authors wrote in a lay summary of their paper. “Therefore, our findings emphasize that conservation and management plans should consider not only numeric responses, but also possible social and physiological effects of control programs on wildlife.”