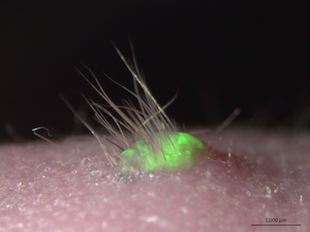 With this new technique, we have successfully grown skin that replicates the function of normal tissue,” study coauthor Takashi Tsuji of Riken told BBC News. “We are coming ever closer to the dream of being able to recreate actual organs in the lab for transplantation.”

It’s not the first attempt to grow skin in the lab. In 2014, researchers in the UK grew human skin epidermis from stem cells. But the skin produced by...

For the present study, Tsuji and his colleagues took cells from the gums of mice and converted them into iPSCs. They fluorescently labeled the cells and grew them in vitro to form tissue with three skin layers: epidermis, dermis, and subcutaneous fat. The researchers then transplanted the tissue into immunosuppressed mice, where it successfully connected to nerves and hair follicle muscles.

John McGrath, a professor of molecular dermatology at King’s College London who was not involved with the study, told BBC News that the work puts scientists “over the halfway mark” toward growing skin in the lab that could one day be used in human patients.

But other researchers were less optimistic. Dusko Ilic, a stem cell researcher at King’s College London—and one of the researchers who grew human skin in 2014—told The Verge that the scientists don’t yet have “the faintest idea how to control or manipulate” the lab-grown mouse skin.

Tsuji told The Verge he and his colleagues hope to translate the technique for clinical use within 10 years.