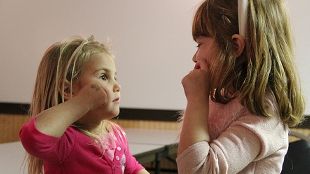 Two little girls signingFlickr, daveyninDeaf students of biology don’t have a single widely accepted sign language for scientific terms and often have to spell out, letter by letter, complex words like photosynthesis. Now a number of organizations are making use of the internet and YouTube to more broadly disseminate signed scientific terms.

The Scottish Sensory Centre’s British Sign Language Glossary Project added 116 new signs for physics and engineering this year, after requesting deaf researchers in the field to submit signs they used and vote on the ones that were selected. “Some will be adopted, and some will probably never be accepted,” Audrey Cameron a science advisor on the project told The New York Times.

However, some people in the community wonder if signs for science should be created rather than simply arise organically. “Signs that are developed naturally—i.e., that are tested and refined in everyday conversation—are more likely to be accepted quickly by the community,” Derek Braun, director of the molecular genetics laboratory at Gallaudet University in Washington, D.C., told the NYT. To this end, Gallaudet created a Wiki page called ASL-STEM Forum, where users can submit, critique, and vote for their favorite signs.

See this interactive graphic of some competing version of signs for scientific terms.