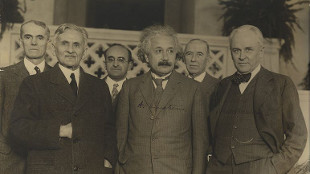 Three Nobel Laureates in Physics. From left to right: Albert A. Michelson, Albert Einstein and Robert A. Millikan. Wikimedia, Smithsonian InstitutionThe Nobel committees’ cap of three winners per prize will unavoidably leave out critical contributors to profound discoveries as more scientists work in diverse teams, according to a handful of editorials and opinion pieces released this week (October 8).

An editorial in Scientific American, published Monday (October 8), argued that the days of the lone, brilliant scientist are over. “Whereas a century ago a patent clerk famously divined the theory of relativity in his spare time, discovering a Higgs boson requires decades of planning and the efforts of 6,000 researchers,” the editors wrote. “No one person—no troika, even—can legitimately claim all the credit.”

The editorial directly recounts the argument that Athene Donald, an experimental physicist at the University of Cambridge, made in a commentary in the Telegraph last...

The editors of Scientific American—who referred to the Nobel Prize as a “charming anachronism”—claim that a limitless award, or an award that honors a team of researchers would solve the problem and bring the Nobel Prizes up to pace with science. Yet, the authors don’t provide any guidance for defining a team member, or determining a cut-off point for a limitless award.

Others take the issue further still, pointing out that the very titles of the awards may be problematic. In an opinion piece for The Guardian, published Monday (October 8), physicist Jim Al-Khalili of the University of Surrey in the United Kingdom, argued that the interdisciplinary, team-led science of the day shouldn’t have to lend itself to a single discipline, such as chemistry or medicine. “Boundaries between the sciences are blurring,” Al-Khalili wrote. “Why not just reward the best research, rather than pigeonholing disciplines?” He suggested that the Nobel committee introduce new award categories each year as science trends dictate.