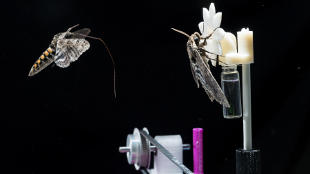 The experimental setup that Sponberg and his colleagues used to determine the hawkmoth's secret to low-light visual acuityGEORGIA TECH, ROB FELTHawkmoths are expert hoverers. At dusk, they emerge to float, hummingbird-like, at flowers, into which they insert their long proboscises to sip sweet nectar. But how their tiny brains are able to accomplish this feat—the flowers upon which they dine are often swaying in the breeze—had been somewhat of a mystery. Now, a team has found that at least one species of hawkmoth, Manduca sexta, is slowing down its brain’s visual processing machinery, in a process akin to slowing the shutter speed on a camera, in order to more clearly see the dimly-lit flowers they are targeting. “You’re exposing the visual system to light for a longer period of time before they need to act on the information,” Georgia Tech biophysicist Simon Sponberg, lead author of a...

Sponberg and his colleagues showed that the hawkmoths circumvent this blurring problem by only slowing their visual processing down as much as necessary in a given environment. Using robotic, 3-D-printed flowers that moved at different frequencies, the researchers showed that the moths were good at tracking the oscillations of flowers that moved at frequencies below about 2 hertz—which is typical in nature. Above that frequency of motion, the moths had trouble feeding. By pairing their observations with a computer model that predicted the flower-motion frequencies at which hawkmoths would have trouble seeing their meals, Sonberg and his colleagues surmised that the insects were employing the strategy of slowing their brains to feed in the waning evening light. “We found that at exactly those frequencies, the moth overshot the flower by exactly the amount we predicted it would,” he told The Verge.

This new understanding of how hawkmoths pull off such precise, low-light flight is of interest to engineers seeking to design robots that might emulate such aerial acrobatics. “If we want to have robots or machine vision systems that are working under this broad range of conditions, understanding how these moths function under these varying light conditions would be very useful,” Sponberg said in a statement. “Insects are capable of doing many of the things that we desire autonomous vehicles and robots to achieve, and also in a miniature package,” Eric Warrant, a zoologist at Lund University in Sweden who did not participate in the study, told The Verge.