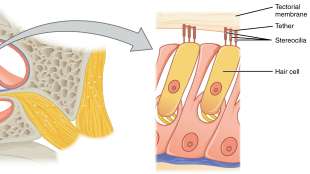 WIKIMEDIA, OPENSTAX COLLEGEHair cells of the inner ear turn sound into electrical nerve signals through a so-called mechanotransduction channel, whose identity remains under wraps. A number of proteins have been implicated as part of this mysterious complex. Researchers have now reported that two of the suspects, TMC1 and TMC2, localize to just the right spots on hair cell tips.

The team generated mice that expressed fluorescently tagged versions of the Tmc genes. In the cochlea, hair cells have finger-like shoots arranged in stadium-seating rows. During the animals’ early development, the fluorescence showed up along the length of these shoots, called stereocilia, and at the tips. Later in life, the proteins were most abundant at the tips of the lower rows of stereocilia. TMC1 remains at the tips through adulthood, whereas TMC2 disappears.

All of this falls in line with the idea that TMC is part of...

“In our current study localizing TMC1 and TMC2 to the site of canonical MET [mechanoelectrical transduction] in hair cell stereocilia strongly supports the hypothesis that they are members of the MET channel complex,” the authors, most of whom work at the National Institute on Deafness and Other Communication Disorders, wrote in their study, published last month (August 27) in Cell Reports. “Whether they are in fact the MET channel or non-pore-forming subunits/accessory proteins modulating the kinetics of gating, channel properties, stability, or subcellular targeting of the actual channel is yet to be conclusively established.”

TMC is of considerable interest because of its role in deafness. Mutations in TMC1 can contribute to hearing loss in humans. Study coauthor Jeffrey Holt of Boston Children’s Hospital and Harvard Medical School has developed a gene therapy of Tmc1 that restores hearing in deaf mice.