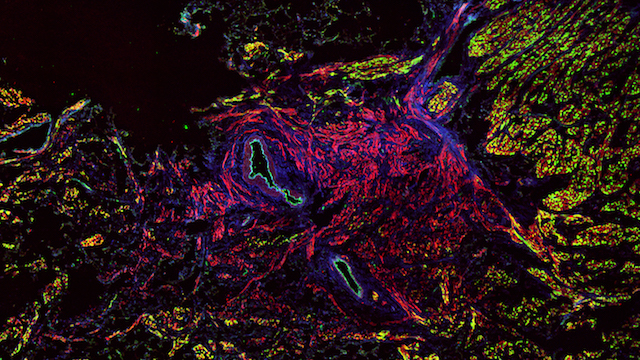 In humans, the heart’s sinoatrial node (SAN), acts as the body’s pacemaker. A new study, published Wednesday (July 26) in Science Translational Medicine, reports two backup mechanisms that may prevent heart failure when the organ is faced with arrhythmia.

“This is the first step in explaining why the SAN can be ‘sluggish’ for years before a total failure, allowing the clinician to detect the problem before a catastrophic event,” study coauthor Raul Weiss, a cardiologist and researcher at Ohio State University, says in a statement.

Weiss and colleagues used a variety of techniques, including 3D tissue reconstruction and molecular characterization, on samples from 21 donated human hearts. To observe heart function, the team placed live tissue into glass chambers filled with an oxygenated solution and simulated blood flow through the...

When the researchers added adenosine, a molecule involved in heartbeat rhythmicity that is produced in high quantities during ischemia and heart failure, they discovered two backup pacemaker mechanisms in the “head” and “tail” regions of the SAN.

Additional molecular analyses revealed different levels of two cardiac proteins, A1R and GIRK1/4, in the different SAN regions. The researchers think these may help regulate the activity of the backup pacemakers.

“Robustness—through functional, structural, and molecular redundancies—is an important property of the human SAN, which allows it to efficiently maintain its automaticity and conduction even during external and internal perturbations,” the authors write in the study. “More detailed knowledge of the human SAN complex during normal and pathologic conditions is fundamental for the development of novel treatments for SAN arrhythmia.”