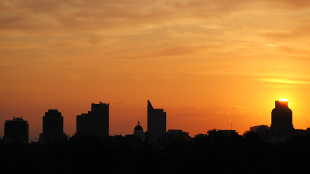 FLICKR, C.M. KEINERRecently noted for their association with an increased risk of conflict, warmer temperatures may also be responsible in part for an uptick in hospitalizations related to inflammatory bowel disease (IBD) and infectious gastroenteritis (IG).

A retrospective study out of University Hospital Zurich has found that heat waves significantly increase the risk of both IBD and IG flares compared with typical weather. Analyzing information collected from 738 IBD and 786 IG patients admitted to the Swiss hospital between 2001 and 2005, as well as from 506 people who were hospitalized for other noninfectious chronic intestinal inflammations, Christine Manser and her colleagues found that heat waves increased the risk of IBD flares by 4.6 percent and of IG flares by 4.7 percent for every additional day within the period of elevated temperatures.  The researchers also found that the effect of heat waves on people with IG was most...

“The most likely explanation is that heat waves cause a change in bacterial composition of the gut,” study coauthor Thomas Frei from the Swiss Swiss Federal Office for Meteorology and Climatology wrote in an e-mail to The Scientist. Because gut flora take time to grow and expand, “there would at least be some lag time expected.”

Writing in the American Journal of Gastroenterology today (August 13), Frei, Manser, and their colleagues note that other groups have reported somewhat conflicting results for seasonal uptakes in flare-ups among IBD patients. “This study ties heat stress to digestive symptoms supporting the observed seasonal variation in the clinical course of inflammatory bowel disease and suggests that microbial infections of the gut might be additionally influenced by climate changes,” Manser said in a statement.

Of course, there could be other factors at play, noted Metin Basaranoglu, a professor of medicine at the Ankara Yüksek Ihtisas Hospital Gastroenterology Clinic in Turkey who was not involved in the study, in an e-mail to The Scientist.  “One such study should be based on a large population-based database . . . and all data should be controlled for known risk factors of IBD, which could also be influences by seasonal variations, such as NSAIDs or antibiotic prescriptions,” he said.

Basaranoglu also criticized the study’s sample size and time frame. Such numbers, he said, “are far too small to discern relevant temporal patterns or draw any meaningful epidemiologic conclusions.”

Frei said his team is now working to expand their analysis to include more data from patients in additional European cities.