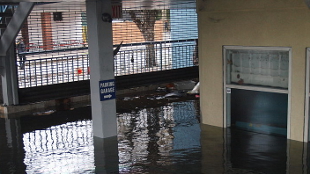 Flooding caused by Sandy in Brooklyn, New YorkWikimedia, VicpetersIn the aftermath of the floods brought on by super storm Sandy that killed thousands of genetically engineered mice at a New York University (NYU) research center, the wider research community is rallying to help the scientists worst affected by the losses.

Once the storm had passed and it was clear that scores of important mice strains developed at NYU’s Smilow Research Center had been lost, several researchers offered to help restart colonies. Now, the crowd-funding website Microryza is hosting an effort to raise money for affected NYU researchers to “restore the research Sandy destroyed.” The site has waived all fees, so all the money raised goes straight to the researchers.

Science Exchange, an online marketplace for the sharing of experimental tools and services, has also waived its fees until the end of the year for anyone who research has...

Meanwhile, NYU has come under fire for not doing more to protect its animals. Fran Sharples, director of the life sciences board at the National Academy of Sciences—which sets animal care guidelines for National Institutes of Health grantees—says that lessons must be learned. “Anybody with half a brain knows you do a site-specific analysis [of disaster risk], and it's really stupid to put your animals in the basement if you're in a flood zone,” she told Reuters.

In its defense, NYU released a statement noting that the “vast majority of our animals used for biomedical research were unharmed.” It also pointed out that the Smilow building, where thousands of rodents drowned, had been built to withstand a storm surge 20 percent stronger than the worst flood of the past century. “Animal resource staff was on site continuously to mitigate the damage from the storm, but due to the speed and force of the surge, animal rescue attempts were unsuccessful," the statement read.