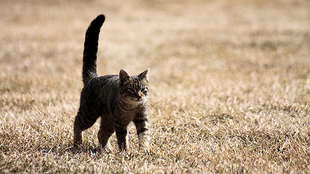 Though the domestication of dogs has been well studied, much less is known about how cats came to cohabitate with humans. Scientists have suggested that wild cats became a part of early agricultural societies based on their attraction to the rodents that fed on stored grain. Now researchers have examined cat bones found in the early agricultural village of Quanhucun in China and suggested that cats likely did become domesticated through a commensal process. Their work was published yesterday (December 16) in Proceedings of the National Academy of Sciences.

The team of Chinese and American scientists found evidence of rodents and eight felid bones at an archeological site in Quanhucun, China. They carbon dated two cat skeletal samples and showed that they spanned a two hundred year period from approximately 5,300 years ago. Measurements of the felid bones also revealed that the cats were likely...

“It’s very hard to find, archaeologically, exactly what relationship caused domestication,” coauthor Fiona Marshall of Washington University in St. Louis told The Atlantic. “But what this shows us is, yes, there was food for ancient cats in ancient farming villages, and that they helped the farmers out, making it a mutualistic relationship, by eating rodents.”

These cats were probably not living in peoples’ houses, though. “There’s nothing to show us that there was anything more than an alley cat type of relationship in this village,” Marshall told The Los Angeles Times.

“This is a super-interesting opening chapter, but it’s just the beginning of the conversation,” NIH fellow Carlos Driscoll, who was not involved in the research, told ScienceNOW. The research raised questions for Driscoll about these cats’ origins. “What cat is this, and where did it come from? The key ingredient that's missing here is DNA evidence,” he told The LA Times.

According to ScienceNOW, the researchers are now collaborating with Jean-Denis Vigne of the French National Centre for Scientific Research in Paris to sequence DNA extracted from the cat bones. Vigne told ScienceNOW that he is “convinced that there was a tight connection between humans and cats at this time in China.”