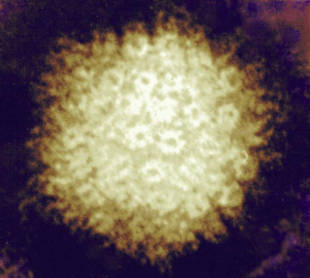 Electron micrograph of herpes simplex virusFLICKR, NIAIDResearchers have traditionally designed vaccines against herpes simplex virus type 2 (HSV-2) to elicit antibodies that targeted the viral surface protein called glycoprotein D (gD-2), which the virus uses to enter host cells. But by deleting gD-2 from the viral genome, William Jacobs of the Albert Einstein College of Medicine and his colleagues not only rendered the virus unable to infect cells, they were able to develop a vaccine that forced the murine immune system to produce antibodies that recognize different viral targets.

“We had a hunch that gD-2 might be masking other viral antigens, and that by removing this dominant protein we would expose those previously masked antigens to the immune system,” Jacobs said in a statement.

Using the gD-2–lacking virus to immunize mice, the researchers elicited complete protection against wild-type HSV-2, both when the animals were challenged intravaginally or...

“A dominant protein like that is like a loud person in a room; other people speaking can’t be heard,” coauthor Betsy Herold, a pediatric infectious disease doctor at Einstein, told Science News, drawing the analogy to gD-2 and other viral antigens.

“Our findings challenge the existing dogma that says an effective herpes vaccine must stimulate neutralizing antibodies against gD-2,” Jacobs said in the statement. “It’s almost as if the virus evolved gD-2 specifically to hide the other antigens; gD-2 turns out to be a Trojan horse that misleads the immune system.”