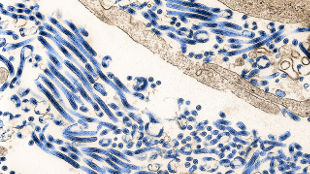 Ebola virus particlesFLICKR, NIAIDGaithersburg, Maryland–based Emergent BioSolutions will continue to develop its experimental monoclonal antibody therapy for Ebola, thanks to a two-year, $19.7 million task order issued this week (July 20) by the US Department of Health and Human Services (HHS). The work will take place at the Baltimore Bayview Center for Innovation in Advanced Development and Manufacturing (CIADM), one of three facilities established as public-private partnerships under the HHS’s Biomedical Advanced Research and Development Authority (BARDA).

“Preventing, detecting and treating Ebola infections remain critical not only for the current epidemic in West Africa but also to minimize the impacts of future outbreaks,” HHS Director Robin Robinson said in a press release. “The development of this experimental drug represents significant progress in making Ebola therapeutics available.”

Emergent’s therapy includes the same three monoclonal antibodies as ZMapp, the Ebola drug from Mapp Biopharmaceuticals of San Diego that was...

Meanwhile, after a failed clinical study of its RNA interference–based therapy, TKM-Ebola- Guinea, Tekmira Pharmaceuticals is shifting away from Ebola drug development, instead focusing on treatments for hepatitis B virus (HBV). The move follows the company’s January acquisition of OnCore BioPharma, which was working on several experimental HBV treatments. To reflect the integration of OnCore, Tekmira is changing its name to Arbutus Biopharma, effective August 6. “We are very excited about the prospects for our integrated new company, which has undergone a transformation to a complete HBV solutions company,” Tekmira President and CEO Mark Murray said in a statement.