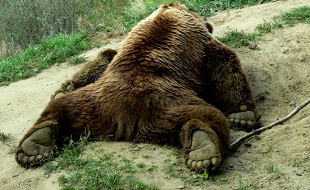 WIKIMEDIA, HAPLOCHROMISBrown bears (Ursus arctos) hibernate for up to six months each year. Before hibernating, bears double their fat stores, becoming what scientists call “seasonally obese.” Researchers have now shown that the secret to healthy weight gain may lie in the bears’ gut microbiota, which also vary seasonally. Their findings were published last week (February 4) in Cell Reports.

“We know that the microbiota is very responsive to what we eat. So if a bear eats a lot in the summer and it doesn’t eat in the winter, then there should be an altered microbiota,” study coauthor Fredrik Bäckhed of the University of Gothenburg, Sweden, told BBC News. “What we learn from our study is that it appears that the altered microbiome can contribute to the altered adiposity (fattiness).”

The researchers collected fecal samples from wild brown bears in February (when the bears were hibernating) and...

“What we found was that if we colonized the mice with the summer bear microbiota, the mice gained more adiposity compared to if the mouse was colonized with feces from the same bear in the winter,” Bäckhed told BBC News, adding that “although [mice] gained more fat mass, it didn’t impair their glucose tolerance.”

Margaret Morris of the University of New South Wales, who was not involved in the study, told Cosmos that the study is “interesting because it implies the [gut microbes] may actually be driving metabolism in way that could be harnessed.”

Although the results are unlikely to have direct consequences for human medicine, Bäckhed told BBC News that understanding the role of energy-harvesting microbes in summer samples could lead to potential therapeutics for people suffering from malnutrition, such as cancer patients.

He added in a press release that the findings point to an underappreciated role for gut microbiota in bears’ metabolic evolution.

“The restructuring of the microbiota into a more avid energy harvester during summer, which potentially contributes to the increased adiposity gain without impairing glucose metabolism, is quite striking,” Bäckhed said. “The microbiota may be a more important switch for energy metabolism and cold adaptation than previously appreciated.”