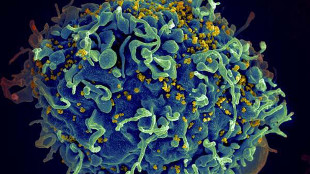 NIAID/NIH, SETH PINCUS, ELIZABETH FISCHER, AUSTIN ATHMANHIV enters the brain early in the course of infection and begins to evolve separately from the blood-based viral population as early as 140 days after initial infection, according to a study published last week (March 26) in PLoS Pathogens.

Researchers from the University of North Carolina, Chapel Hill, the University of California, San Francisco, and Yale analyzed cerebral spinal fluid and blood from 72 HIV-positive patients who were not being treated with antiretroviral therapy (ART). The scientists found that 30 percent of the patients either had replicating viruses or signs of inflammation in their spinal fluid, and that these symptoms persisted for varying amounts of time in 16 percent of the patients, suggesting an ongoing infection.

The researchers also sequenced the viral genomes from approximately half of the patients. From five months after infection to the two-year end point of the...

“The implication is that there’s a specific infection of the brain rather than HIV just being carried in the blood and passing through the brain,” study coauthor Serena Spudich of Yale University told The Atlantic. HIV is already known to cause cognitive impairment, leading to HIV-associated dementia in one-third of patients who are not on ART. A genetically distinct viral population in the brain could also make the disease more difficult to treat, since some medications may not be able to target an infection there.

“This shows that viral replication and inflammation can occur early in infection, with the concern being that the damage caused could be irreversible,” study coauthor Ronald Swanstrom of the University of North Carolina added in a statement, although future research will be needed to determine if the brain infection is truly untreatable.