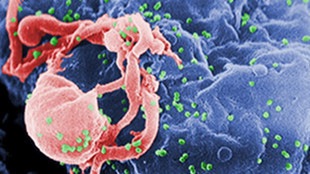 Fourteen adults are nearly rid of HIV following aggressive treatment soon after contracting the virus, according to a paper published in PLOS Pathogens earlier this week (March 14). The news follows an announcement earlier this month (March 4) that an infant had been functionally cured of HIV by very early treatment.

While many people who contract HIV do not know they are infected so soon, the 14 patients all started anti-retroviral therapy within 10 weeks of getting the virus, BBC News reported. They had come to the hospital for unrelated reasons and tested positive for HIV while there.

They took the drugs for around 3 years, at which point the virus would come back in most patients who stop taking drugs. But the 14 patients have now gone between 4 and 10 years without relapsing, NPR reported, though very small amounts of the virus do remain. “They...

The scientists believe the anti-retroviral drugs knocked down the virus before it could fully establish itself in reservoirs in the body where it can hide from the immune system, but that early treatment likely only has these dramatic results in a small subset of patients.