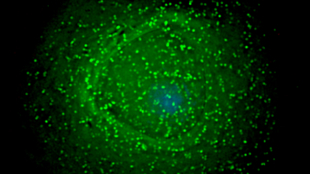 HIV-1 particles assembling at the surface of an infected macrophageWIKIMEDIA, PLOS BIOLOGYThe former Iowa State University (ISU) researcher who added human antibodies to blood from rabbits in order to make an HIV vaccine look more effective admitted to misconduct in an Iowa federal court yesterday (February 25), the Associated Press reported. Dong-Pyou Han, who was forced to resign from ISU in 2013 after the fraud was discovered, pled guilty to two felony charges of making false statements on a National Institutes of Health grant application and in subsequent progress reports. He now faces up to 10 years in prison for the crimes.

It is rare for scientists to be formally prosecuted for research misconduct. Usually, the Office of Research Integrity (ORI) fines guilty individuals and bars them from receiving federal funding for a set period of time. But Han’s acts—which made it appear that rabbits were developing antibodies...

After ORI uncovered Han’s misdeeds, ISU was forced to pay back nearly $500,000 in grant money, and the government canceled an additional $1.4 million that was slated for the research team. In addition, as Retraction Watch reported last year, a poster presentation abstract that Han coauthored was retracted from Retrovirology.

Han is set to appear in court again on May 29 for sentencing.