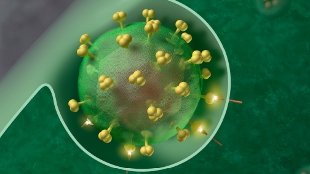 WIKIMEDIA, J ROBERT TRUJILLOScientists have inched closer to the goal of understanding the structure of the HIV trimer, an envelope glycoprotein that the virus uses to establish contact with the human cells it will infect, according to new research published last week. The new findings clash with previously published results, prompting calls for the earlier paper to be retracted.

Three late-October papers—one published in Nature Structural & Molecular Biology by researchers at the National Cancer Institute and two Science papers written by a collaborative group from The Scripps Research Institute in La Jolla, California, and Weill Cornell Medical College in New York City—arrive at similar structures for the elusive protein, which could be a valuable vaccine target. This latest understanding of the protein, which holds that a spike-like structure is surrounded by three helices that help swivel the spike into position to hook on to a target human cell,...

Since researchers began questioning Mao’s results in June, he and his colleagues have failed to provide raw data or detailed methods to their critics. “They are throwing up a lot of smoke screens, not releasing the data, and not retracting the paper,” van Heel continued. “The next step is due with these new structures.”

The recent findings add to an expanding body of work surrounding the solving of structures related to HIV’s ability to infect human cells. Earlier this year, researchers in China produced a 3-D portrait of CCR5 a protein on the surface of white blood cells that is instrumental in HIV’s incursion into host cells.

The new papers describing the structure of the HIV trimer represent independent corroborations for the structure, and Mao told Nature he welcomes the fresh data, but noted that they do not invalidate his results. “A full understanding of the [glycoprotein] structure likely will require scientist to capture all different ‘snapshots’ under different contexts and ‘connect’ them together,” he wrote in an e-mail to Nature.