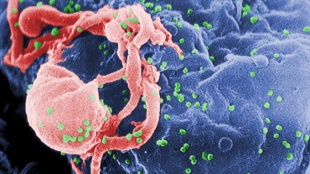 A long-term study that found a drastic reduction in HIV transmission rates when patients received early treatment with antiretroviral drugs rose to the top of Science's list of the year's best scientific breakthroughs. The study, published in an August issue of the New England Journal of Medicine, found that HIV-positive people are 96 percent less likely to transmit the virus to their heterosexual partners when they were treated with antiretroviral drugs early in the course of their infection.

Out of nearly 1,800 participating couples from across the world where one partner was HIV-positive and the other HIV-negative, 28 people became newly infected with the virus in the 4 years since the trial began. Only one of those new infections occurred in the group of couples in which the HIV-positive partner was treated...

Antiretroviral drugs are known to lower the viral load in the blood and in genital secretions, and researchers had suspected that treatment with the drugs prevented the spread of the disease. But this study is the first to confirm the effect in a large trial. The clinical trial was started in 2007 and was slated to run through 2015, but was stopped earlier this year when an independent monitoring board recommended that all of the study participants receive antiretroviral treatment immediately because their benefit was so markedly beneficial.