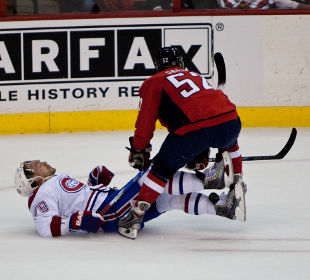 FLICKR, CATHY TIt was only three months ago that the National Football League (NFL) announced its $765-million settlement with some 4,500 former professional football players who have struggled with health problems that they blame on years of repeated head trauma. Now, 10 former National Hockey League (NHL) athletes are following in their footsteps, launching a class-action lawsuit against the league regarding their concussion injuries.

The lawsuit accuses the NHL of not doing enough to protect players from concussions. “The NHL’s active and purposeful concealment of the severe risks of brain injuries exposed players to unnecessary dangers they could have avoided had the NHL provided them with truthful and accurate information and taken appropriate action to prevent needless harm,” read the suit, which applies to injured players who retired before February 14, 2013.

The players are seeking damages and NHL-sponsored medical monitoring for what they claim are brain injuries resulting...

“[We] were kept in the dark about the risks of concussions and many of the former NHL players are now suffering from debilitating head injuries from their time in the league,” Rick Vaive, a former player for the Toronto Maple Leafs, among other teams, and a plaintiff on the suit. “Hopefully this lawsuit will shine a light on the problem and the players will get the help they deserve.”

NHL Deputy Commissioner Bill Daly issued a statement in response to the lawsuit on Monday (November 25): “While the subject matter is very serious, we are completely satisfied with the responsible manner in which the league and the players’ association have managed player safety over time, including with respect to head injuries and concussions. We intend to defend the case vigorously and have no further comment at this time.”