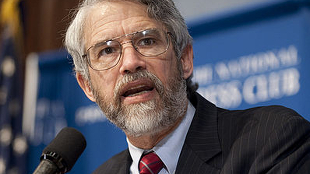 Drawn up by Lamar Smith (R-TX), chair of the House of Representatives science committee, the proposed “High-Quality Research Act” would require the NSF to prioritize projects that “advance the national health, prosperity, and welfare” of the United States, that are “groundbreaking,” and that are not already supported by another federal agency. The NSF currently judges grant proposals based on their “intellectual merit” and on the “broader implications” of the research on society. In an April 30 statement, Smith said that is legislation would improve on that process “by adding a layer of accountability” to the taxpayer.

Holdren also argued that it is dangerous to allow politicians to interfere with the peer-review process, which he described as “the gold standard” for grant proposals. “Fiddling in any fundamental way with the model of judging research proposals being reviewed by scientific experts in the relevant fields would place at risk the world-leading quality of this nation's scientific and engineering enterprises,” he said.

While the Obama administration has not taken an official position on the draft legislation, Holdren said that “the President made it very clear on Monday that he will do everything he can to protect that gold standard," referring to Obama’s recent remarks at the annual meeting of the National Academy of Sciences.